Despite some delays and left luggage it was finally the 23rd of August.

(Almost) on time at 5 p.m. we boarded the plane to France at Wien-Schwechat. After two nerve-wracking hours, we landed in Paris and we were tired, hungry but mainly incredibly excited what would happen the next four days. After another hour on the train we could finally get to our rooms at the Hostel but we couldn’t go straight to bed, we were in Paris after all.

Know anyone in the middle of Paris

The originally planned trip to the Eiffel Tower was swiftly exchanged for a cozy get-together, because Andi wouldn’t be Andi, if he didn’t know anyone in the middle of Paris. In this case the delegation from Luxemburg. What should have been one hour, lasted until 2 a.m., but we could sleep in the bus tomorrow anyways. 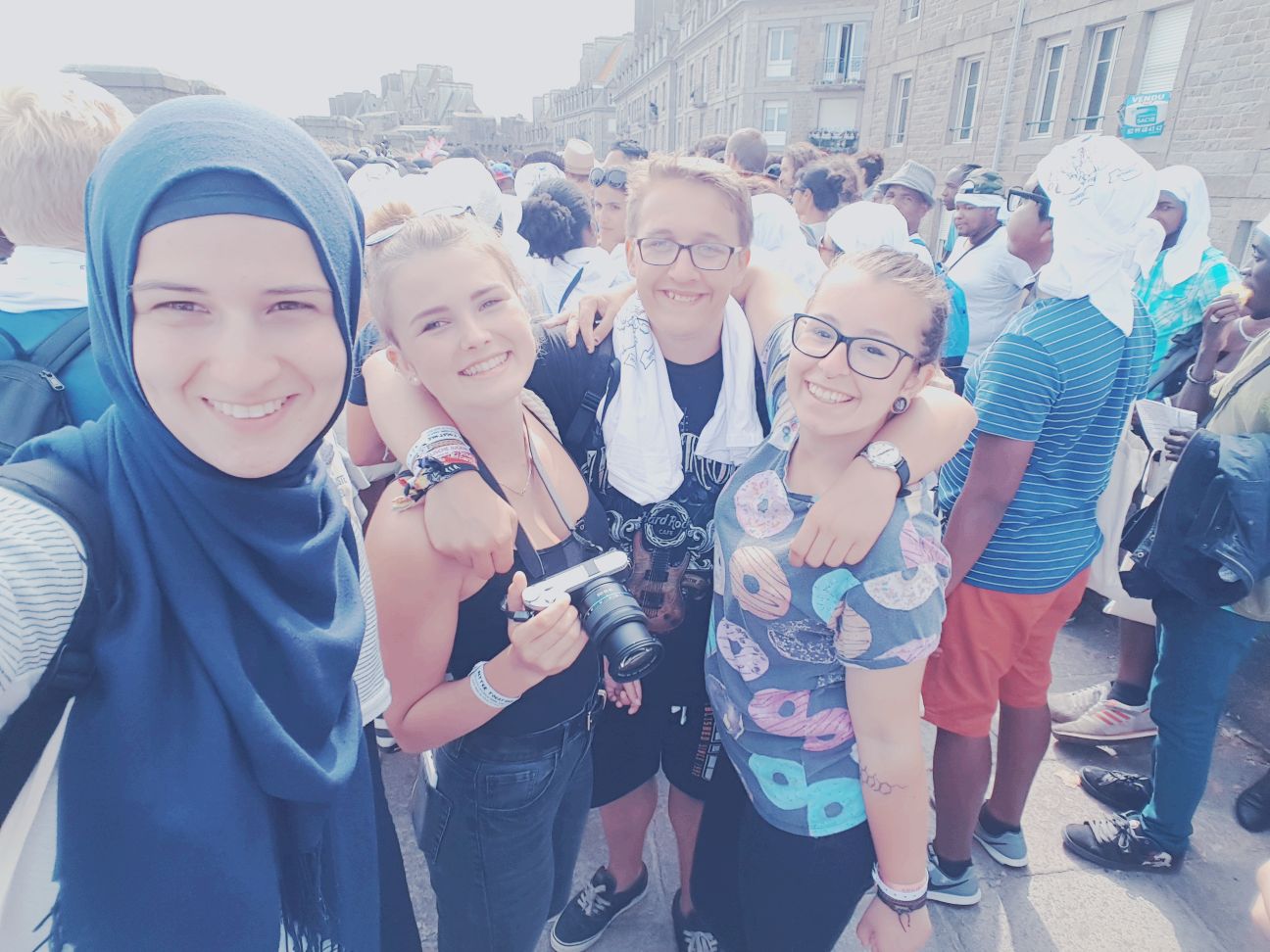 After a night too short and a bus trip too long, we got to our Tents in St. Malo and shortly after that the opening ceremony started, where a lot of speeches were held and we could enjoy improvisational theatre. As all of the nearly 800 Participants were greeted, the next point on our agenda came up. Everybody went back to their tents and came together at the Fraternités.

The basic idea behind Fraternités is that smaller groups of about ten people could exchange ideas and get to know each other better. Because we were so many it would be difficult to share the experiences and emotions, which accumulate all day, with all participants. Therefor the Fraternités were installed. 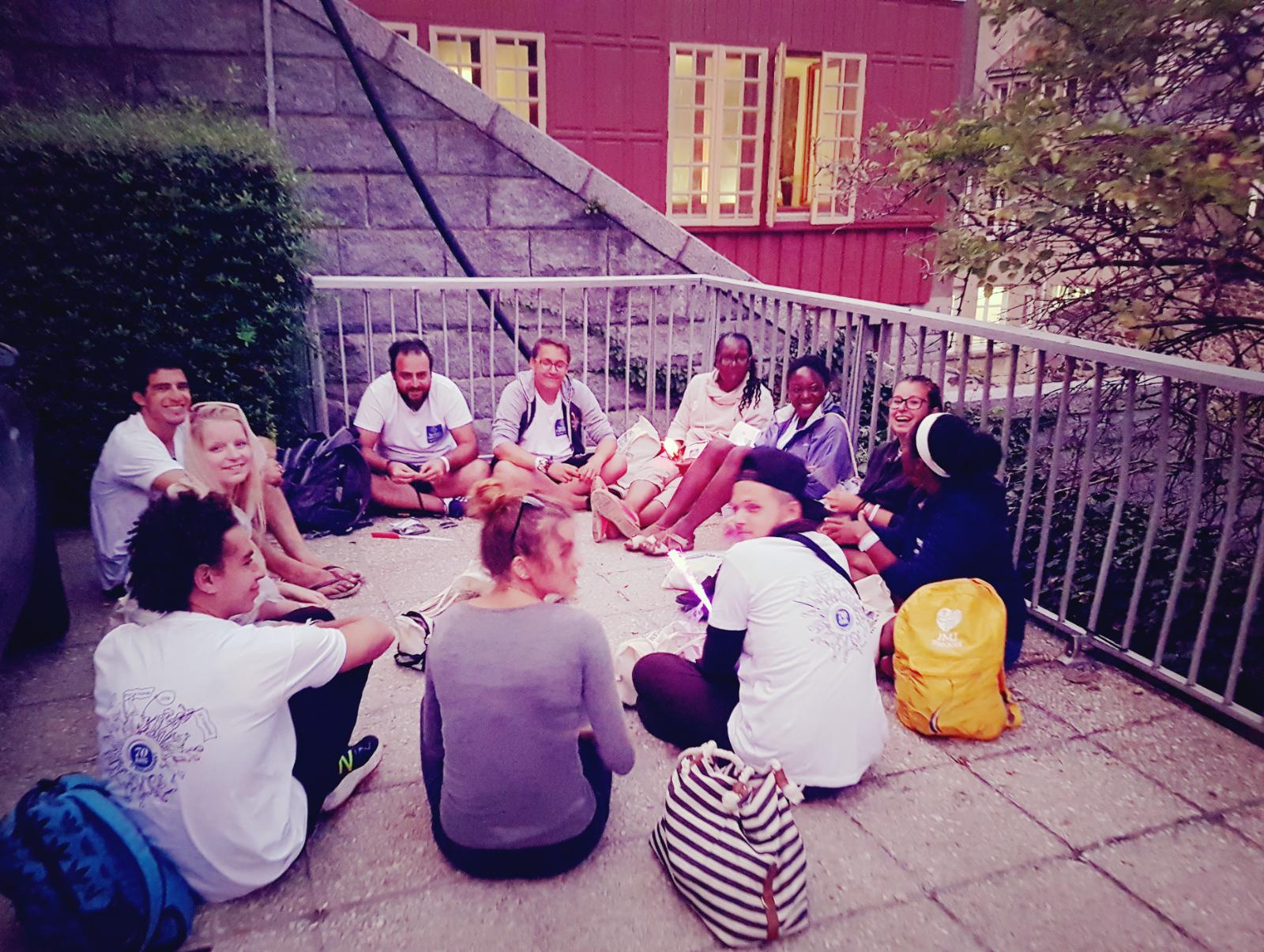 After all the questions, we should ask each other, were answered and all organizational things were cleared, it was time for dinner. After that an intercultural evening started, in which delegations from different countries had the opportunity to bring us their heritage a little bit closer through theater, music and dances.

At least as fast as Thursday passed Friday. We started more or less on time at 9:30 with the first Workshop on a wide range of topics (more on this in the videodiary on Facebook) which lasted until lunch. After that everybody was free to spend the afternoon how he wanted to. Many decided to expand their cultural horizon and participate in the Muslim and Christian worship services. Others went to the beach or explored the city center. In the evening, the groups discussed their day at the Fraternités and celebrated in the big tent at the CaritasFM-Party.

800 people from around the world walking over the fortress

And there was the last day in St. Malo. In the morning, there were different workshops on the agenda and after lunch and some free time we were divided into buses and drove into the city. As the highlight of the trip we could experience almost 800 people from around the world with drums, various instruments and banners walking through the city and over the fortress. The atmosphere of the parade was indescribable. For hours there was drumming, singing and celebrating regardless of origin or religion. The end of the parade was the Cathedral of the city, where a Round Table took place in the evening, attended by people of various backgrounds who had the opportunity to talk to participants of the Université D’ete about topics such as religion and spirituality.

Late in the evening we made our way, together with our Franternités, with singing (What would be an intercultural exchange without I am from Austria and Fürstenfeld?) and interesting conversations along the beach back to the site, where everybody ended the evening at the bonfire.

What do they eat in Lebanon for breakfast?

Faster than we wanted, it was Sunday already. Time to say goodbye to people who grew close to heart in the last few days. After a Farewell ceremony with film, theatre and lunch, where everybody was talking about eating habits in their home countries (wherefrom else should one know, what you eat in Lebanon for breakfast?) it was time for the dreaded farewell. 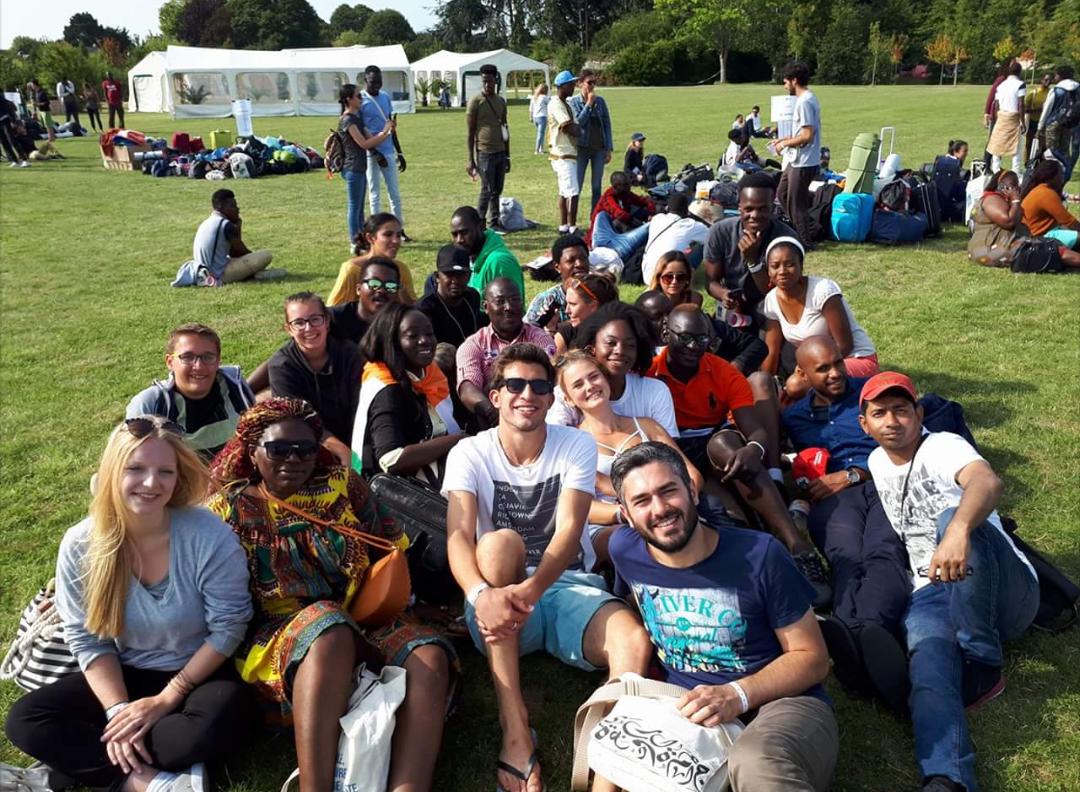 We got back into our Buses and trains, which brought the participants back to the different places around France, and drove back for five hours.

Finally, back in Paris and freshly showered, we finally had time to get to the Eiffel Tower. After a one-hour walk across Paris we reached our target, which you can see in the last entry of the videodiary, and we used the opportunity for countless selfies.

With full memory cards and the intention to return us as soon as possible to meet our new friends, we got to the airport and flew back to Vienna on Monday.

In conclusion, we can only say: What an incredible trip … Still today, two weeks later, as I am writing this entry, I still get goose bumps when I think about the parade and the many wonderful people we have met.

St. Malo, we are coming back.