Saint-Augustin wrote « the world is a book, and those who don’t travel read only one page ». I am Honorine, I am 22 years old and I totally agree on this. I have always been a curious person, eager to make discoveries and meet people. I like social relations and gazing at nature. For all these reasons, I decided to volunteer abroad. YoungCaritas Bolzano (in Italy) and youngCaritas Luxembourg recruited me to participate in the facilitation and the dynamization of the “youngCaritas in Europe” network, an initiative that has been launched in 2014 within the European Union to manage social projects with and for young people. It is financed thanks to a strategic partnership via the Erasmus+ program.

The first period of my volunteerism last 3 months, from April to June. The youngCaritas team of Bolzano welcomed me very well. Nicole picked me up at the station the day I arrived and she presented me to the youngCaritas head Guido, to the civil servicers Lisa and Sara, and to the European slovak volunteer Ivana. She also showed me the place where I stayed. I had a private room and a private bathroom within the Caritas building, and a common kitchen I shared with the two other volunteers who also had a room in Caritas. I met Silvia, my tutor, the week after. I had no difficulty to get integrated in the team and I directly felt at ease, even if I have never been used to speak English before. 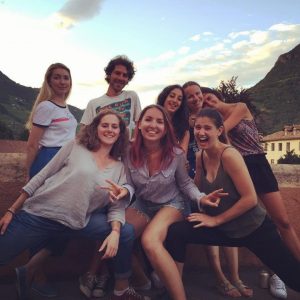 From the very beginning of this adventure, I could enjoy the wonderful Southern Tyrolian landscapes and the beautiful weather. Ivana introduced me to the other European Voluntary Servicers who were living in Bolzano and we became friends really fast. We had a Whats App group to communicate and ask people to join when one or another decided to go out, to travel, or simply to hang around. We really spent great times together.

From a more “professionnal” point of view, I got to know the representatives of all the youngCaritas partners in the “youngCaritas in Europe” network through video conferences that were set to organize the workshops on youth they moderated during the Regional Conference of Caritas Europa in Tbilissi. I had the chance to participate in this event and meet “for real” the members of the network. I also participated in the moderation of a workshop, attended the sessions for the election of the Executive Board of Caritas Europa with the Presidents from nearly all the European Caritas, and went in the street with many other youngsters to speak to the Georgian people about the actions youngCaritas carries out. With my tutor, we also had some free time before the event to discover the beautiful city of Tbilissi. 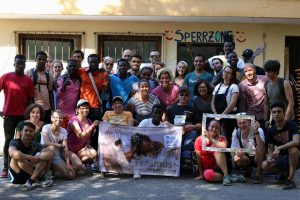 Another highlight of this period in Southern Tyrol was the organization of the “Action Meeting”, an event which gathered 40 young volunteers from all the partner countries of the network: Luxembourg, Germany, Austria, Switzerland, Italy, and France. With the team, we planned many activities to make the participants discover the region, the city of Bolzano and its inhabitants, but also to help them create links, exchange on their experience, think about their involvement and the future of “youngCaritas in Europe”. It paved the way to many friendships and souvenirs.

During these 3 first months, I also participated in a project called « Tanz die Toleranz ». We were 6 girls and 1 guy and we met twice a week to work on 7 choreographies created by Jenny, dancer and volunteer for the Caritas caffè. Each of the choreographies dealt with a part of an entire story: the story of a person who hates herself at the beginning but realized that she is worth something and that she has to love herself and be tolerant with herself. Through these dance lessons, we learnt not to judge ourselves but to dance with our hearts and do the best we could. We performed twice, and the public liked it even if we made some mistakes. 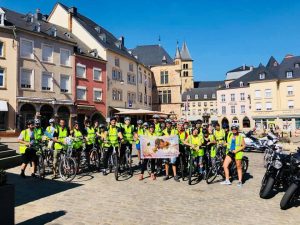 I continued this volunteering experience in Luxembourg for two months, from August to September, as a European Voluntary Servicer. It started very intensely since I arrived just before the project “YOUrovelo 2018” was launched. It is a project financed by the European Union’s program Erasmus+. On Wednesday, Paul Galles, my tutor there, introduced me to the youngCaritas team and drove me to the beautiful flat I now live in, next to the scouts’ chalet. On Monday, we welcomed the 30 participants aged 15 to 30 from Georgia, Italie, Syria, Ukraine, Slovakia, Spain, Luxembourg and France.

For a week, we biked through Luxembourg, sharing our daily life and creating friendship. Despite the fact that not everybody spoke either English or French, we found other means to communicate and thanks to some “team building” activities we got closer. We laughed a lot when riding our bikes and the atmosphere got really solidary: when someone fell ou had a problem with his bike, the others stopped to help and protect him from the cars. In the evening, we could exchange on our cultures and we were given the opportunity to play some games. It was nice to see everybody joyfully participating in the activities the others proposed. The more exciting was that these young people were so different but a the same time they had so much in common! The European Union’s motto “United in Diversity” really apply to this bike tour. This beautiful experience will stay long in my memory. 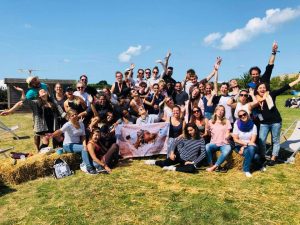 After this tour, I only had the time to pack my things to go on a second trip : the Summer University of the Secours Catholique – Caritas France in Saint-Malo. As a “youngCaritas in Europe” partner, it’s been 4 years that Caritas France invites volunteers and staff members of the network to this event. This year, they took part in the workshops that were organized during 4 days on the theme of ecology. Each participant chose a special topic:  food, permaculture, time keeping, smartphones’ influence, nature, water consumption, waste management, etc. The workshops they attended aimed at raising awareness among them on ecology and make them think about what they can do in their daily life to be more eco-friendly. I have already been a participant in the Summer University last year, and I could say that I preferred this edition. Indeed, I already knew many people when I arrived, I was part of the “youngCaritas in Europe team” which was very cool, and I was more “interested” in the theme. I really had the feeling to be a piece of a puzzle, certainly because all participants were asked to prepare the meals and serve the food together. Also, there were less participants and those who were here looked more involved in the event. Thanks to the workshops and other activities on ecology, young people met, exchanged and left Saint-Malo with many projects and resolutions.

I only made half of my EVS in youngCaritas Luxembourg, but I can already say that my experience within the “youngCaritas in Europe” network is a success. I got to know amazing people, I lived many intercultural moments and acquired competencies I will need in my professionnal life. Even if my daily activity is not intense, I had the chance to organize and participate in interesting events that shape the “youngCaritas in Europe” network and its future. Volunteering abroad helped me to turn some more pages of the book.