From the pilot project „youngcaritas Peru“ to a countrywide movement

It is about one year now since the pilot project “youngcaritas Peru” got the ball rolling in five national dioceses. In the last months the Voluntarios (volunteers) in Abacy, Arequipa, Chiclayo, Piura-Tumbes and Tacna really enhanced the movement: Collecting trash from the neighborhood, teaching disadvantaged children how to read and write or even tinker and knit with the elderly. The younsters between the ages of 18-28 independently planned social projects on the topic of education and environment and put them – with a certain thirst for action – into action.

Everything from the start

Caritas is a global active organization – of course even in Peru. The clerical organization supports needy people and spaces help in form of aid supplies and food stuffs all around the world to children and nursing homes. But is there any opportunity to lend a hand on-site?
The idea was born: youngcaritas Peru as a platform for younsters who want to get honorary engaged. The central headings: Environment, education, health, work with the elderly, and volunteering in general.

According to the motto “impactando en tu comunidad” (participate for your community) youngcaritas calls on younsters to take part, engage and realize own ideas. 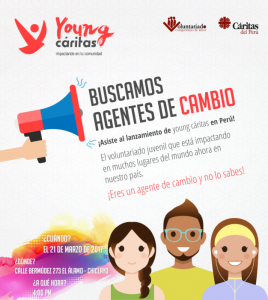 In 2017 posters, posts and illustrations spread like a wildfire and called attention to the action in Social Media, corporation-partners, and universities: Buscamos Agentes de Cambio – We’re searching for revolutionary!

Beforehand three project leaders of each of the five dioceses took part of a workshop which took place in the north or rather south of the country. Within two days they discovered the goals and backgrounds of youngcaritas and developed methods to build up the project in their particular surrounding area so the young people would be able to enhance and manage it later on independently.

Become a Revolutionary: How does that work?

So the basic structure of the project already existed, the only thing missing at this point were the youngsters. Therefore each interested person was invited to participate at an information event at his local diocese. In this framework the project leaders presented the concept of youngcaritas and asked the participators about wishes and dreams they have. 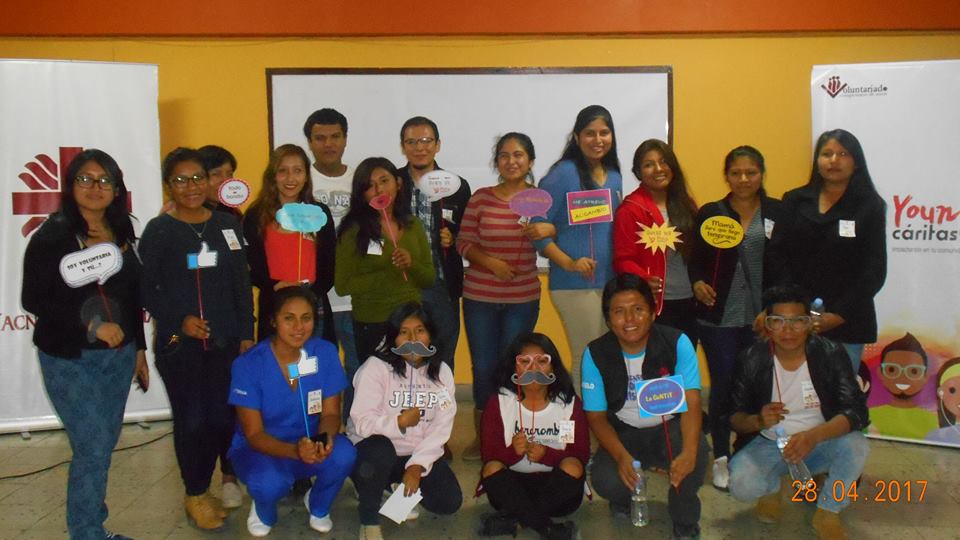 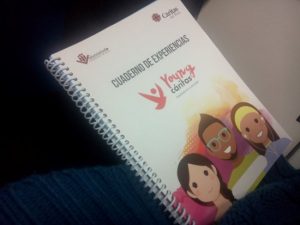 The plan: The group of volunteers meets several times within one month to develop one action in their environment and implement them as a team.

The participators got a small booklet to document the actions they realized. By that they could register their impressions. What experiences did I appreciate the most? What could we do different next time? Where do we have to engage?

Lisa and Nicole from Baden-Wuerttemberg (state in the south of Germany) started their social year from summer 2016 to august 2017 at Caritás in Peru. They took part at building up youngcaritas in their congregations and supported the projects of the local Voluntarios: Lisa and Nicole in Arequipa. 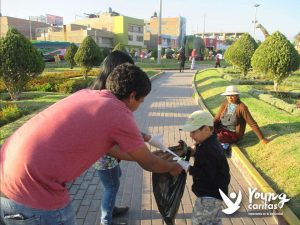 Lisa reports: “In the end of april 2017 the new project youngcaritas Peru started in Tacna as well.
19 adolescents united to call attention to several topics by volunteering for their community.
In the middle of of june we realized our first action on the heading of environment protection.
We gathered in a park with all of the attendant children. The volunteers read out stories of nature and the children listened to it very attentive.

By those stories the kids were full of motivation for the upcoming competition. They were divided into four groups each consisting of five children. The children and their parents were challenged to collect as much trash as possible within ten minutes. The result was a clean park and a new brushed up knowledge of the children. – What a successful day!” 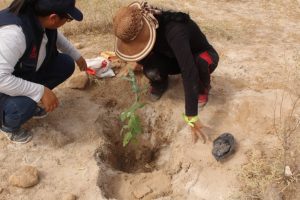 Nicole reports: “While our joint meeting we considered what disturbs our environment and what we can do to change that. We came to the mutual opinion that there are not enough green areas and trees existing in Arequipa. That’s why we decided to plant trees into a district called “Cono Norte” which is one of the outer areas of Arequipas. We implemented that by the help of a school: The kids take care of the trees and water them so they won’t be damaged after a few days.” 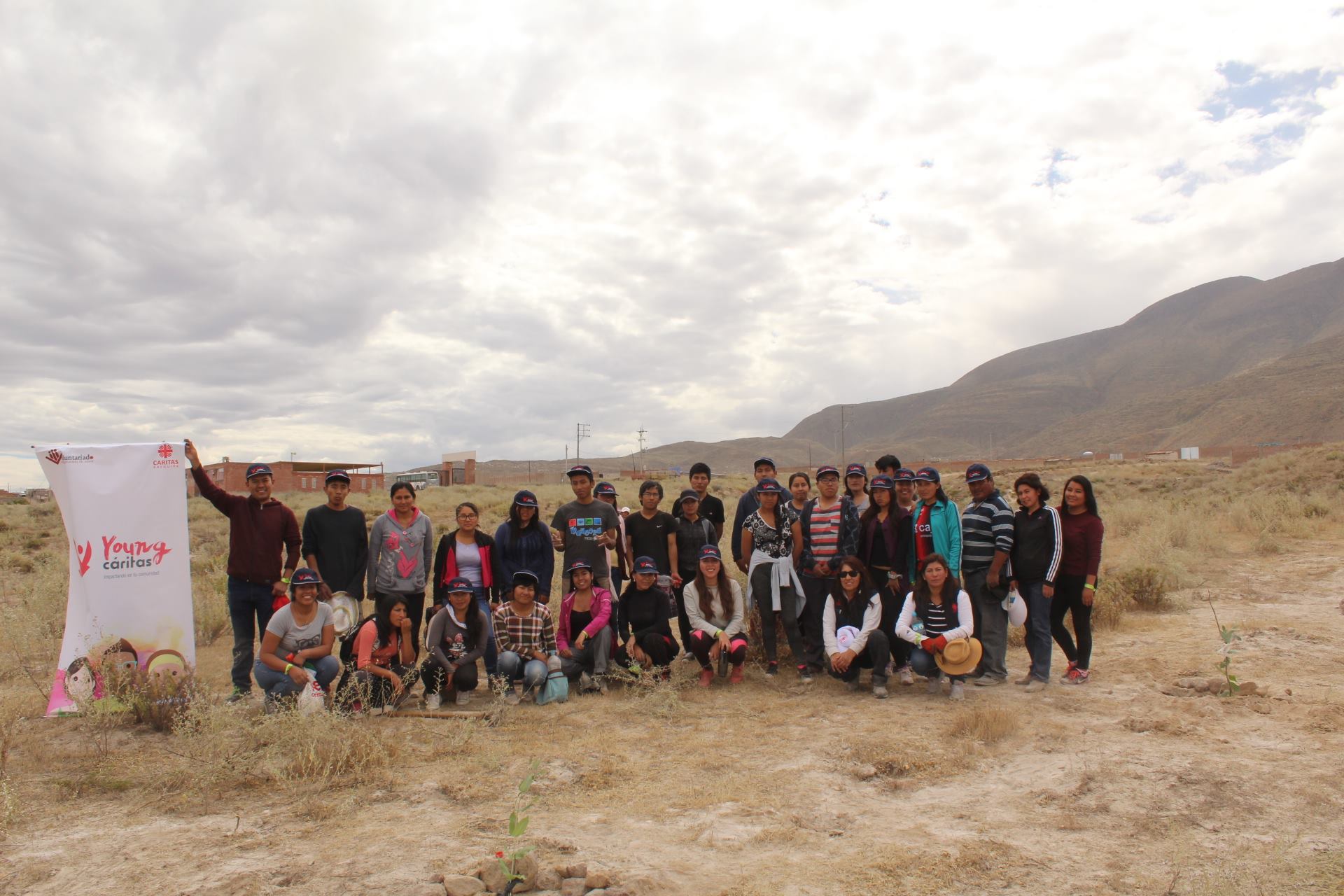 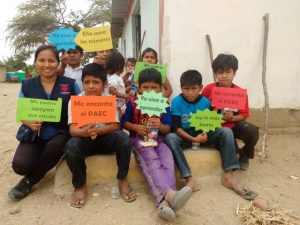 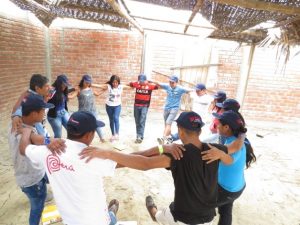 A further action tackling the topic of “education” took place in Chiclayo: Women and mothers who are not able to write or read got support for – for example – helping their kids with their homework. In Piura one focused on the subject “learning”. The young volunteers taught the children what it actually means to interact respectfully with one another in an educational surrounding. 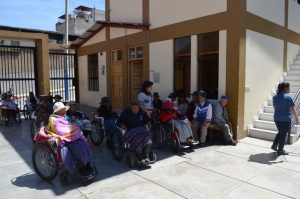 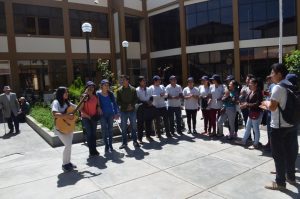 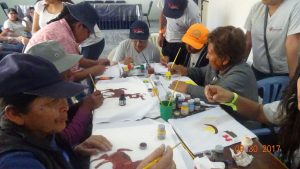 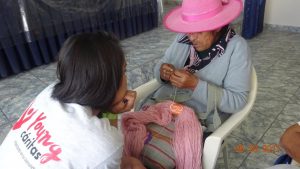 In Arequipa the volunteers took part in a tinkering-day with elderly. While that they of course tinkered, painted and knitted.

What’s on the menu for this year? 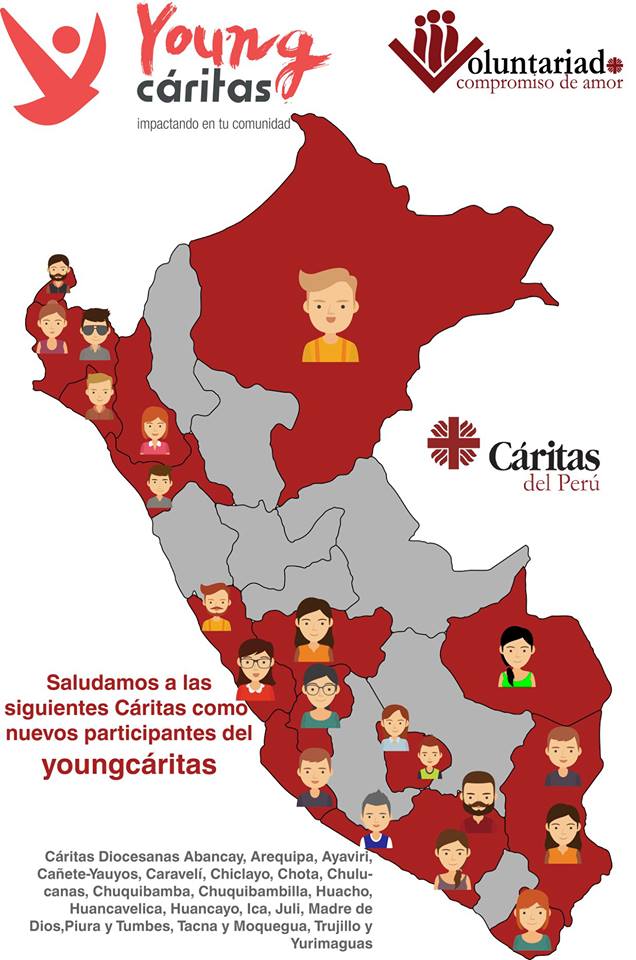 In this year 19 dioceses take part of the project youngcaritas. There is a big recent change in the structure of youngcaritas work: The volunteers don’t work on many several subjects anymore. They now tackle only one main topic which gets chosen by the local dioceses. And again there was a workshop for the project leaders – this time in Lima. 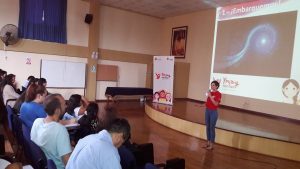 This year the incredible number of 980 enthusiastic younsters registered at youngcaritas. And it’s getting more and more! All of them want to become Agentes des Cambio, revolutionaries, to engage in their community for a better togetherness. 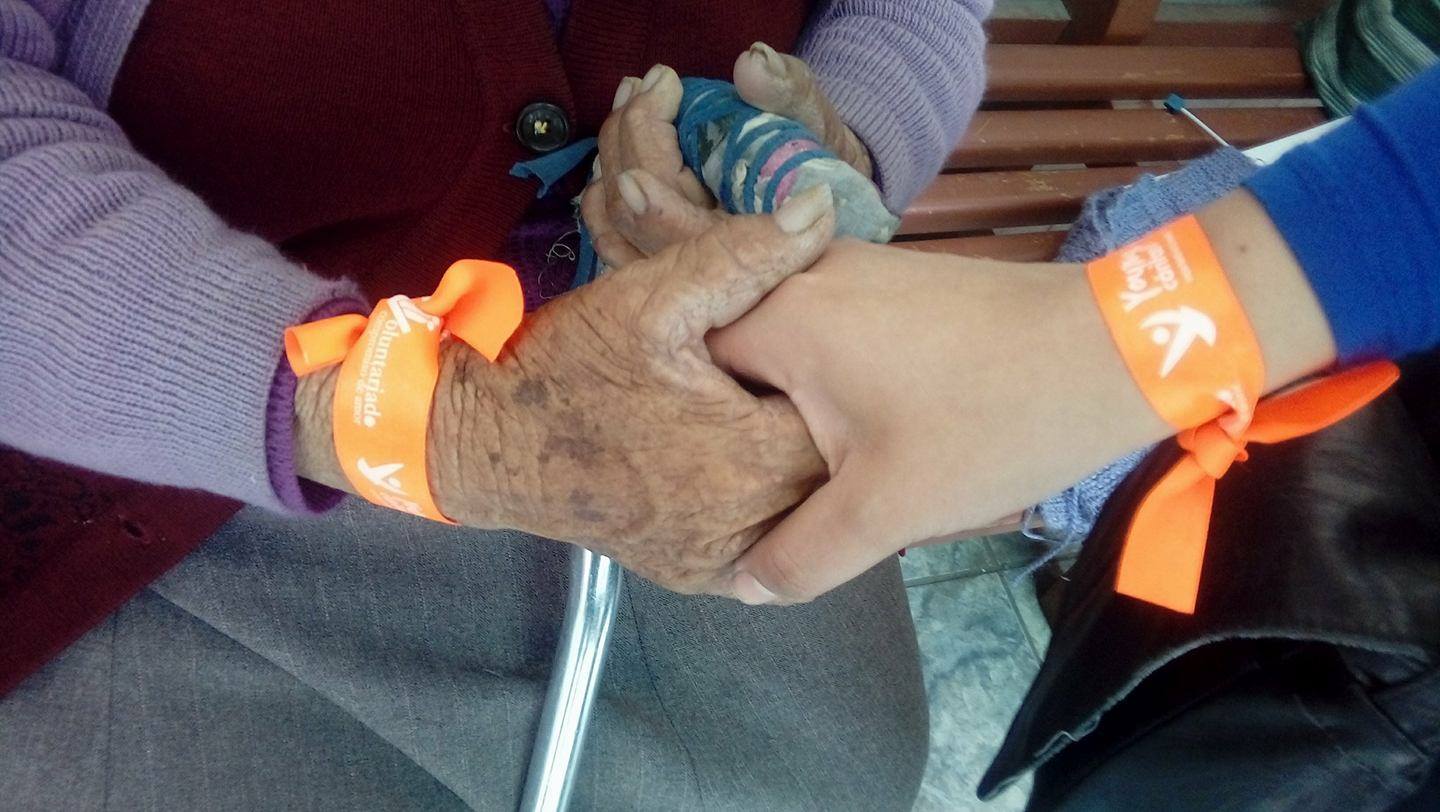