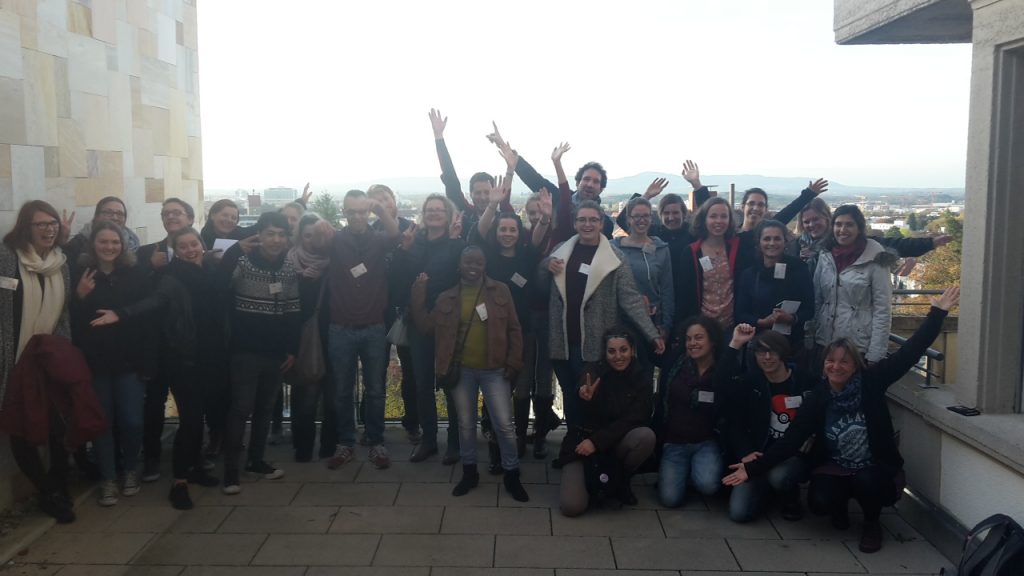 It was already the third meeting of the network “YoungCaritas in Europe” in the frame of the programm Erasmus+ and this time it met in Freiburg. But for me personally it was the first meeting because my Voluntary Year of Social Service at youngcaritas Germany just started in September. I liked the three days of the network meeting very much and I learned a lot.

When I arrived at the Caritas Academy in Freiburg, I met many new faces and did not know at all to whom I should introduce myself first.  We worked in two groups: Employees and Youngster. As I am in my Voluntary Year of Social Service, I worked with the Youngster.

The atmosphere was fresh. We gained a common understanding very fast and talked and discussed many different issues. What I really liked, were the different methods which our moderator applied to develop our subjects: with short games, walking through the area of the Academy or classical chair circles. It was very nice and also exciting to understand the ways of thinking and strategies of the others and to find a way to our common goals together. We were told to “dream big” in inventing ideas for a Multiplier event in 2017/18. So we exerted ourselves and thought „without any borders“. 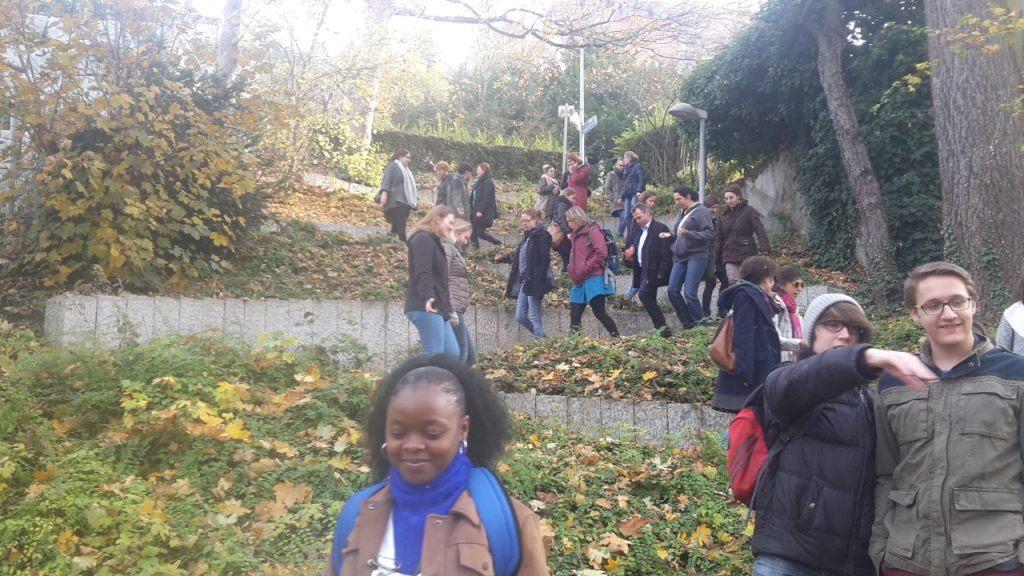 We wanted something big and special where not only insider, but also the public can have some fun. When I imagined my last vacation in Spain, something came to my mind: The streets full of booths with food from everywhere, if it was Fast Food or restaurants, there was simply everything. The others liked my idea and started thinking further immediately. “Intercultural cooking market” we called our idea: An event one or two days long where the participants build up a big market with food from different countries. Music of the different cultures should play to the self-made food in every booth. And we thought about having something big at the last day of the event: An Open Air Concert where music and dances from different cultures are presented by the participants.

We also collected many ideas about an action for the Youngcaritas in Europe Day 2017. At first we thought about an action which could make the grey everyday life a little more colored. With these words the idea already came to our minds: „Color the wall“. We played around with the idea because we didn´t jet liked the title and so we came up with “Color up your life”. „Escape the grey and dull everyday life by coloring something, if it is a sheet, the street in front of your house, your T-shirt or just a wall!”

Another idea came to our minds by a group game which we played in the evening before. The game was called “same, same but different”. The idea of the game is to find differences and similarities with the other players. For the action we thought: When we meet a foreign person we often think that we have more differences then things in common. So we just switched the name and called our idea “different, different but same”. The people should play this game with strangers or at a meeting in big groups and make videos or photos and post it in social media. We presented our ideas to the Employees which were very curious about them and especially at the presentation of the “Intercultural cooking market” it was obvious that their mouths watered immediately. 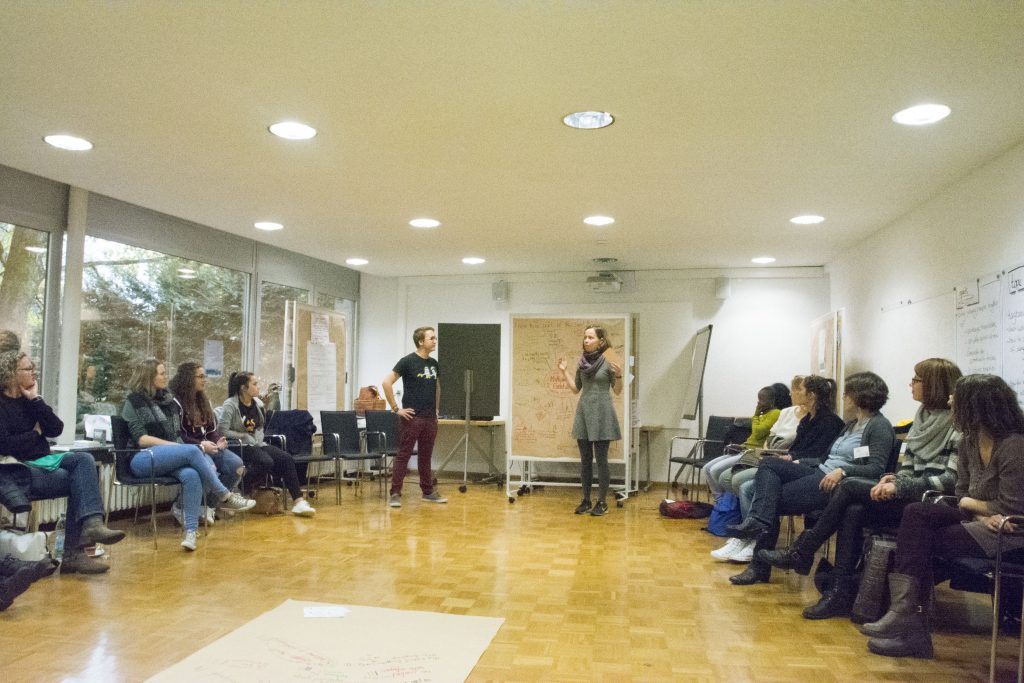 Maybe the idea could inspire everybody in such a way because there was always a big and extremely tasty choice of food at the common food breaks! There was time to get to know the others better and one also had a nice view of Freiburg, so what do you want more? 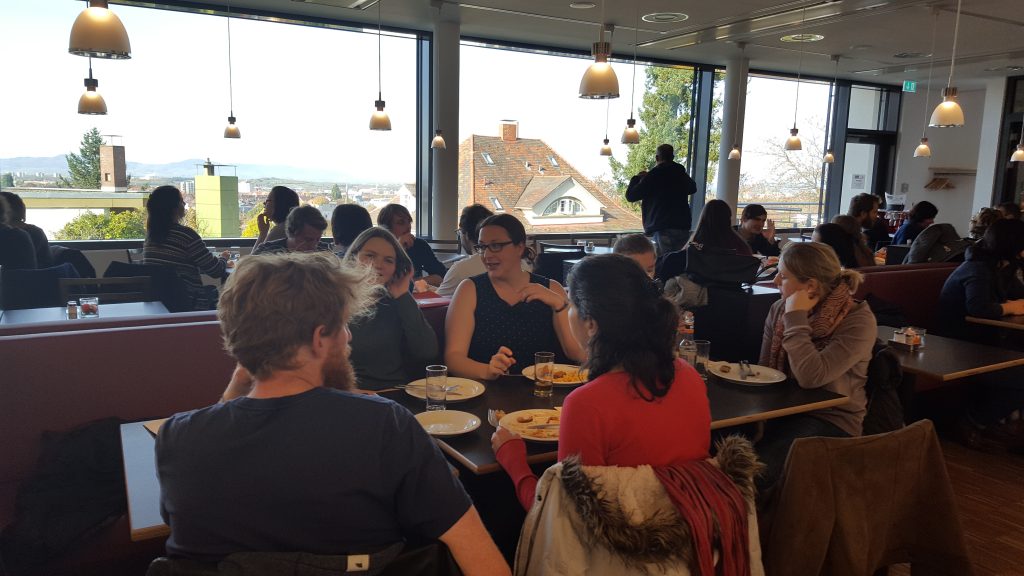 In the evenings there was a nice atmosphere in the big group. There were interesting presentations (f.e. of a guest from Caritas International, the aid organization of Caritas Germany) and common activities (f.e. the visit of the (photo)exhibition “We cross borders”, which were arranged by refugees). As an inhabitant of Freiburg I went home with a lot of new perspectives and ideas. 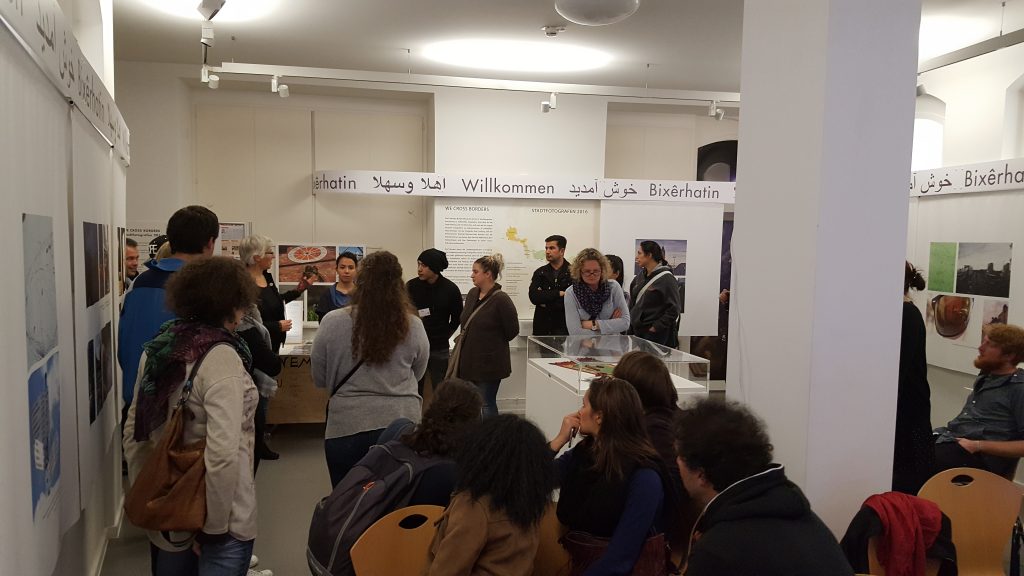 Through this meeting I learned a lot, especially concerning the work of the network and the duties and fields of work of the other European YoungCaritas. And I’m very happy that I have also got to know new people of other European countries.