The different kind of a girl’s bookclub. Here’s where literature meets engagement and Saudi-Arabia meets Dortmund. 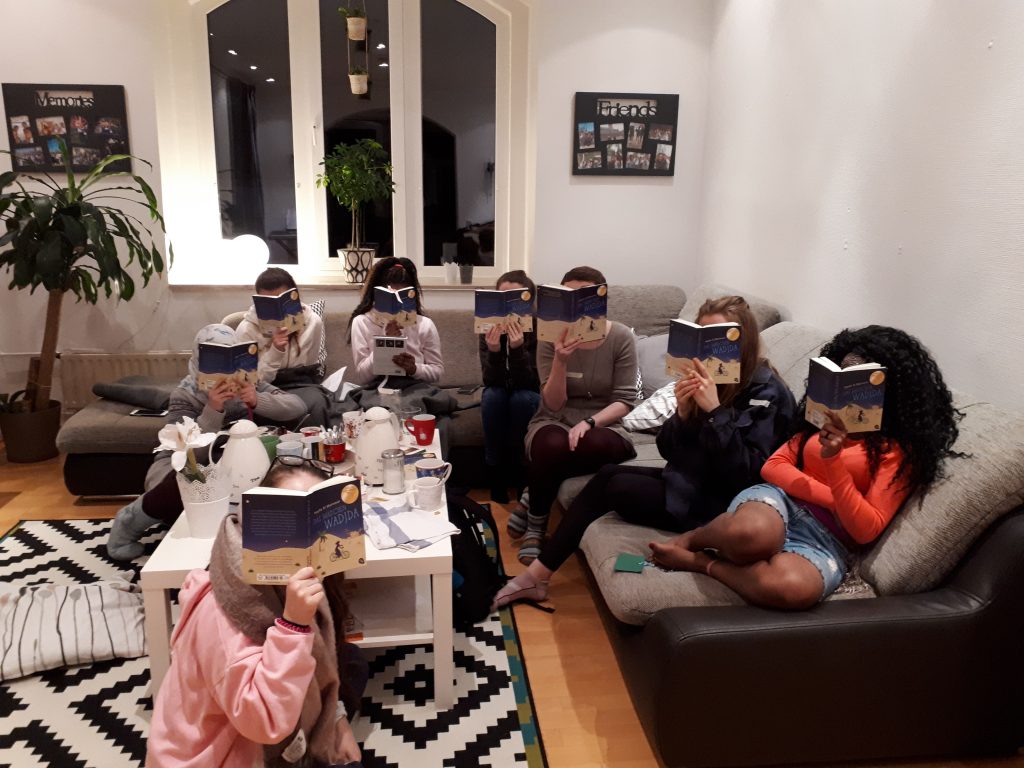 Ten girls, a comfortable sofa, warm tea, some pretzel sticks, cookies and the TV is off. The reason of their unusual meeting is neither watching “The Bachelor” nor “Germany’s Next Topmodel”, but reading a book called “The Girl Wadjda”.

The story: The ten year old girl Wadjda lives in Saudi-Arabia and desires a green bike. She doesn’t care for the interdiction for girls of riding a bike in her homecountry. Instead she starts to collect money by herself to earn an own bike until her strict principal chatches her in action.

This book was chosen by the young women of the residantial group UMFs (in german: unbegleitete minderjährige Flüchtlinge which translated means as much as unaccompanied underaged refugees) of Dortmund-Asseln.
They’re reading this book all together as a group with youngcaritas. In the beginning they had a few books to choose from. For example “Ronia the Robber’s Daughter”,
“Anne Frank”, “My Sister Klara” or “Island of the blue dolphins”. All of the books they could select from revolved around the same theme: Strong and cheeky girls. Pleasantly the bookstore Mayer from Dortmund donated the books so each girl now owns a book by itself. Three times a month the “LiteaTourists” – a name which by the way describes the journey they take to another world while reading the book – meet. The “journey” normally durates two hours from six to eight pm. 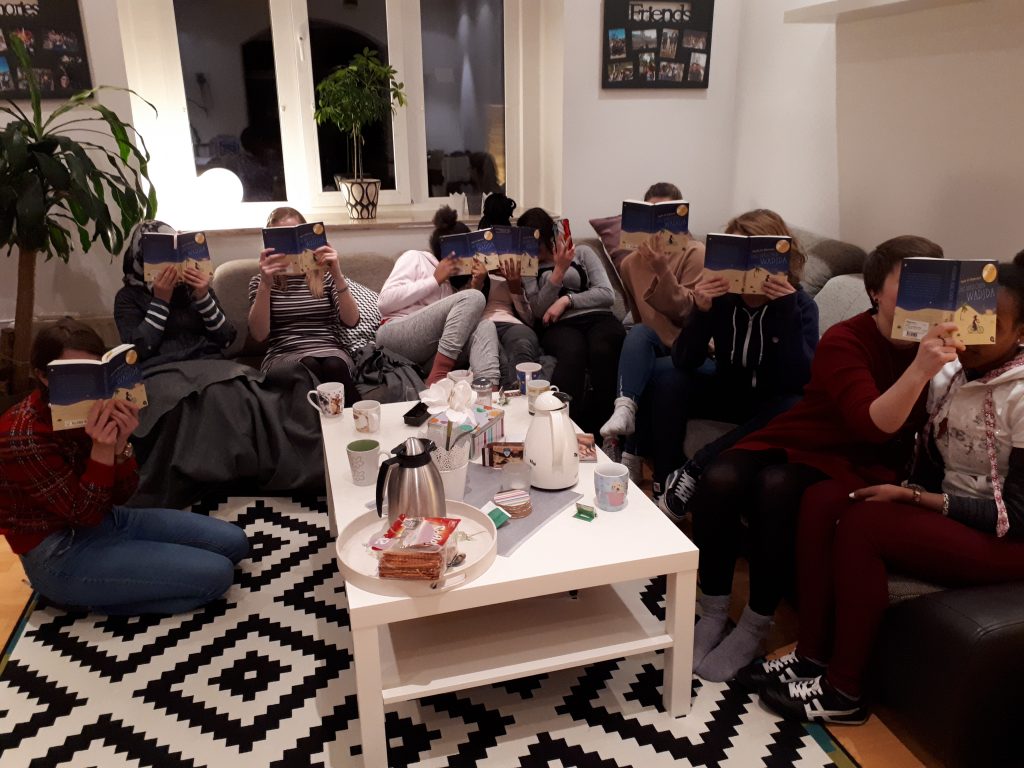 The group with ages from 12-18 years refuged from different countries like Syria, Afghanistan and Eritrea and are now going to school in Dortmund. None of them did ever read a book until the end. To read “The Girl Wadjda” is particullary a huge goal for all of them to reach out for

At the club meeting one after another reads a part of the book aloud, afterwards a round of questions starts:

By using gestures, signs, synonyms and pictures the girls get shown, actet and explained what those words and phrases mean. This process gets repeated until everyone understood the meaning. That can lead to very funny situations and there are days the girls laugh oneselfs to tears.

It’s a very significant fact that reading out loud – no matter how fluenty it may work – doesn’t compulsorily leads to a better text comprehension. In order to this we try to get a deeper understanding of the text by the aid of plakats. We collect facts about her like where she lives, who her parents are etc. 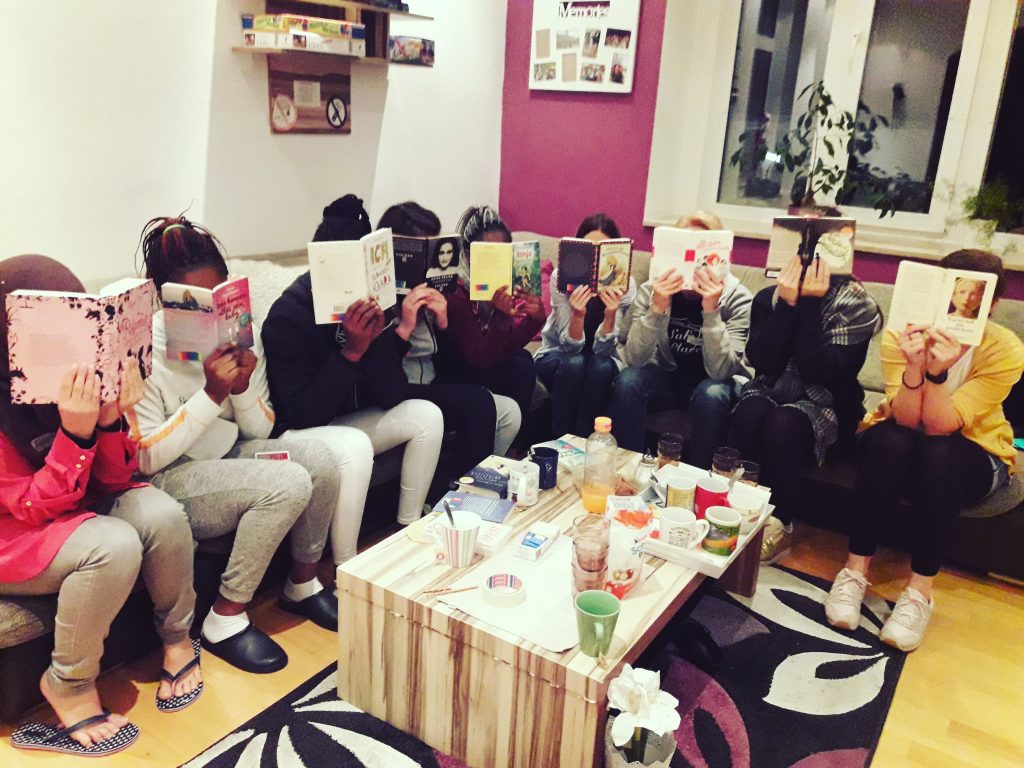 “What’s going on with her parents? Why don’t they live in the same house?” – That’s the questions the young women are most interested in. In this regard they seem to be like little detectives, who have a really good nose and are able to recognize the smallest hints.

“Devrim”, the one who had the idea for this project, is a 18 years old student. She’s going to graduate this year and wanted to participate in a good thing. Her own passion for reading inspired her to start the project. The euphoria this venture causes is immense. Fastly many girls offered to work as volunteers and appreciated the idea of engaging for the reading in a group with the refuged girls.

One unwavering girl.
A voluminous book.
A green bike.
youngcaritas Dortmund.
Lots of fun and a big dream.
That’s the “LiteraTourists”.