30 years after the fall of the iron curtain youngCaritas organised from the 18th of July to the 19th a special meeting in Ulrichsberg: Following the Pan-European picnic young people from Upper Austria and the Czech Republic got together in Ulrichsberg. Their slogan was : “Meet me at the border” and during this time together they told each other stories from contemporary witnesses or from their life on the “dead border”. What they wish for the future of the European Union was also discussed. 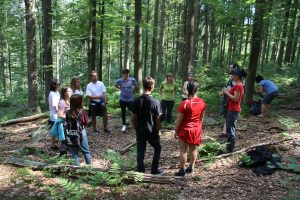 In regard to the “30 years with an open iron curtain 1989” celebration youngCaritas Upper Austria, youngcaritas Budweis and the easthelpfunds of the Linz diocese decided to organize an exchange meeting for young people originating from Upper Austria, the Czech Republic and Germany in the border region Böhmerwald. 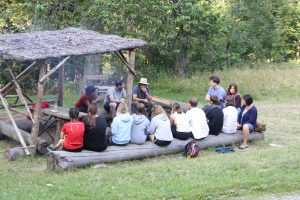 Under the title “meet me at the border” occupied themselves with the time before and after the opening of the borders as well as with the future of Europe. “Beforehand the young people collected experiences from the time of the iron curtain and therefore asked their parents or other contemporary witnesses”, exolains Bianc Haindl from youngCaritas Upper Austria. The stories were shared during the bonfire in the evening. Ing. Rudi Wakolbinger, ranger of the Böhmerwald school, told us about smugglers and border patrols, about forest operations and how difficult it was to enter in contact with people on the other side. 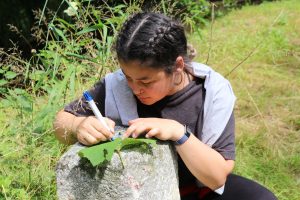 help of Caritas Upper Austria and Jana Valhova from youngCaritas Budweis also shared their experiences. Iris Niederdöckl from the Böhmerwald school guided the teenagers to the most important historical places along the border. The adolescents were particularly impresse by Glöckelberg/Zvonková, which was erased from the map for decades. Horst Wondraschek, who’s mother originated from here, reconstructed the church of this village with the help of donations after the reunification. He established together with Othmar Hanke an exposition about the lifes of the people from Glöckelberg in the old Mesner house.  The teenagers wrote their common idea for a solidary Europe on plant leaves next to the navigation canal at the border, they sent them, as a symbol, down the Schwarzenberg canal towards the Baltic and the Black Sea on a  trip to the future. “That we don’t forget, that our freedom isn’t self-evident and that we have to keep it in the future”, that’s the wish of Maleen Goldschald, member of the youngCaritas actionpool. 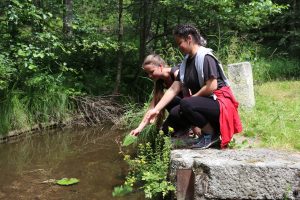 To conclude these two days we organized a picnic on the border to remember the paneuropean picnic. During the Pan-European picnic on the 19th August 1989, they had been opened a border gate between Austria and Hungary. 661 East-Germans were able to flee to the West. The mass flight initiated together with other events a chain reaction to which end came the collapse of the Eastern bloc. 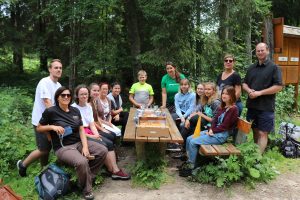 Barbora Fišerová Pegleyová, a young girl from Czech Republic, meant at the end of the 3 countries meeting: “I enjoyed these 2 days and the many stories. Especially the games, during which we learned, how to work together.” Our wish for Europe is a quote from Václac Havel, the first president of the Czech Republic: “Truth and love must prevail over lies and hatred.”