From 25th to 28th of August 2016, enthusiasts could take part in the French Saint Malo in Brittany in the programme of “Université d’été” of Young Caritas France. In Workshops, discussions and excursions it was about the subject „Escape and Asylum in Europe and worldwide“ this year during four days. 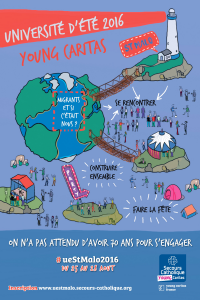 More than 500 participants from more than 30 different countries came to the international youth meeting in Saint Malo. The event which had the motto “Migrants, and if it was us?” was organised by Young Caritas France, a team from employees and honourary of the French charity (Secours Catholique – charity France, SCCF).

Among the participants were honourary and employees of the charity and also fled from different countries. There were ten places for every country of the network “YoungCaritas in Europe”.

In the delegation youngcaritas Germany were Anna from Nuremberg, Sonja and Steve from Krefeld, Aaron and Isabella from Oberberg and Katharina from Würzburg.

The participants were received on Thursday from 14 o’clock in Saint Malo and were informed about the upcoming programme. With the info course there was enough opportunity to get to know the other teams. After the official greeting at 17 o’clock and opening ceremony at 18 o’clock of the summer university, enough time remained to end the evening comfortably.

Friday and Saturday morning it was time for sessions and talks: Contentual the workshops dealt with the origin and the concept from youngcaritas.

There the participants of the summer university were shown “best practice” -examples of youngcaritas locations in Europe (like Germany, Austria, Switzerland or Luxembourg) how youth – and refugees work can simply and effectively be connected. In the afternoon the participants had the opportunity, to take part in an open forum with the question “Which place is there for youngsters in the area of the solidarity?”.

Animated by the ideas of the participants who had been called at the beginning of the summer university, everyone pinned their own thoughts, questions and impulses on the subject on a public bulletin board. Among the rest, there were discussion-rounds on subjects like ” giving youthful trust and responsibility”, “solidarity through sport”, “music and dance to the intercultural approach”, “development of a youngcaritas network for the countries of the south”, “mutual help in Haiti” etc.

Beside the workshops and discussion-intensive sessions the French Atlantic coast invited us to common religious, cultural and sportive activities. A highlight was the solidarity march through the Baie du Mont Saint Michel on Friday evening were the participants made a 4-hour long, guided tour to the Mont St. Michel in small groups in Normandy.

The way framed different stations with which the participants could understand and reflect the experiences of refugees on her trip to Europe with help of short texts and questions. When we arrived there was a common picnic with music, intercessions and a report of a refugee from Calais.

On Sunday the summer university ended with a final ceremony into which once again the central subjects of the past days were summarised.

At the end of the youngcaritas meeting is one thing clear: It was a coloured and varied meeting with the opportunity to get to know new people, to collect knowledge, to exchange about social engagement and to celebrate!

Thanks for the infos and photos to Anna and Sonja and a big thank-you to Katharina for the report and the French translation.

You can find other infos to the programme under the Hashtag #ueStMalo2016 on Facebook, where the reports of the participants are.